Tom Silver studied classical guitar with Alexander Bellow in New York, but left the music world to do post-graduate work and pursue a business career. He ended that career a number of years ago and returned to the guitar, which became a second profession. After revisiting the classical guitar repertoire of his youth, Mr. Silver broadened it to include a wider range of musical genres. In addition to Classical Guitar, repertoire on his CDs and downloads include George Gershwin, Antonio Carlos Jobim, Henry Mancini, Lennon-McCartney, and other greats from the worlds of Jazz, Broadway and Popular Music, as well as selections from the hauntingly beautiful Celtic music of Ireland and Scotland.

Mr. Silver was educated at Drew University and Rutgers University. His music albums – Isn’t It Romantic (2013) Rock Mosaic (2012) and Guitar Mosaic (2009) are available at major online retailers which can be accessed directly in the Music Store. 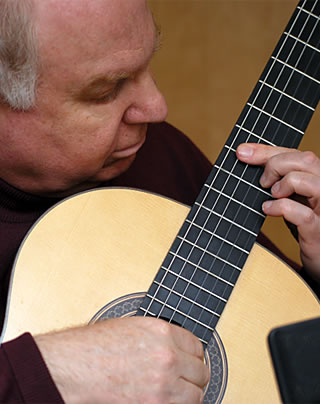