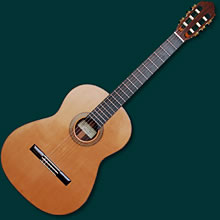 The classical guitar (sometimes known as the “Spanish Guitar”) and its repertoire go back centuries. The instrument could boast of great players and composers in the first half of the 19th century, fewer in the second half, and a resurrection to its greatest heights in the 20th century on into the 21st. Over the past 50 years, much of its repertoire has received global recognition and appreciation by the music-loving public, and the instrument now is taught in many of the finest music conservatories worldwide. The classical guitar is known for its wide range of color and dynamics – from soft, dulcet tones to passionate intensity.

The modern classical guitar got the shape and look we recognize today with the instruments of luthier Antonio de Torres Jurado in the late 19th century. Strings had been made of gut but changed to the more durable nylon with the expanded use of that material in the 1940's. The instrument is played by securing it in the lap and resting the forearm on it while plucking strings with the thumb, index, middle, and ring fingers. Modern technique has the player use the finger pad (tip) in combination with the fingernail. It is the nail, which gives the instrument its clear, crisp tone, but players can control sound quality ("color") by varying the angle of attack on the strings. In selecting a guitar, players can choose from an enormous range of instruments, from factory-made guitars to the highest quality handmade instruments. Today one can order a custom handmade classical guitar from any number of fine builders ("luthiers") domestically or worldwide.

The classical guitar has had many virtuoso players, from Fernando Sor and Mauro Giuliani early in the 19th century to Francisco Tarrega later in the century (all of whom composed for the instrument) – to Andres Segovia, Julian Bream and John Williams among the best known in the 20th century. The last few decades have seen the rise of a new generation of virtuoso players, many trained in music conservatories in America, Europe, or Asia. The instrument's standard repertoire includes original compositions mostly from the 18th, 19th, and 20th centuries, but also transcriptions of lute and other music from earlier centuries. In recent decades, a younger generation of composers has become interested in writing for the guitar.

The classical guitar can give enormous satisfaction to the student who is willing to put in serious, patient practice. You are completely in control of the sounds drawn from the instrument – there are no intervening mechanisms like a pad or a key. Other benefits are its portability and huge range of solo repertoire; though today you often hear it as part of a chamber group. 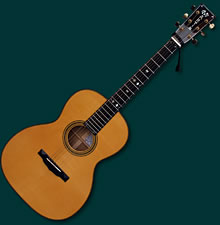 The steel string guitar is an adaptation of the classical guitar but comes in a variety of shapes and sizes. You can buy these guitars in a smaller, classical guitar-like shape – up to the larger "Dreadnought" body, a shape that originated with the famous C.F. Martin guitar company. The steel strings are rougher on the fingers and nails than playing a classical guitar, so players often use finger picks – which usually avoid use of the fingers. Tuning on the steel string (which is often called an "acoustic" guitar) usually is the same as on a classical, though alternate tunings are common on both instruments. Changing tuning from the standard E-A-D-G-B-E on both types of guitars sometimes makes it easier to play certain types of pieces/songs. When played on guitar, the Celtic music of Ireland and Scotland, for example, often sounds much richer when the strings are tuned to a lower pitch.

Steel string guitar is used more in folk, blues, bluegrass and in the popular music styles of great singer-songwriters like Paul Simon, Neil Young and groups like Crosby, Stills and Nash. Earlier examples of great acoustic guitar musicians are Huddie Ledbetter ("Leadbelly"), Chet Atkins, and Merle Travis (father of "Travis picking"). A wonderful contemporary acoustic guitar arranger of many great songs from the past, and ranging from Pop to Jazz, is the British guitarist Laurence Juber, who played lead guitar with Paul McCartney's band, Wings.

Which Guitar to Play?